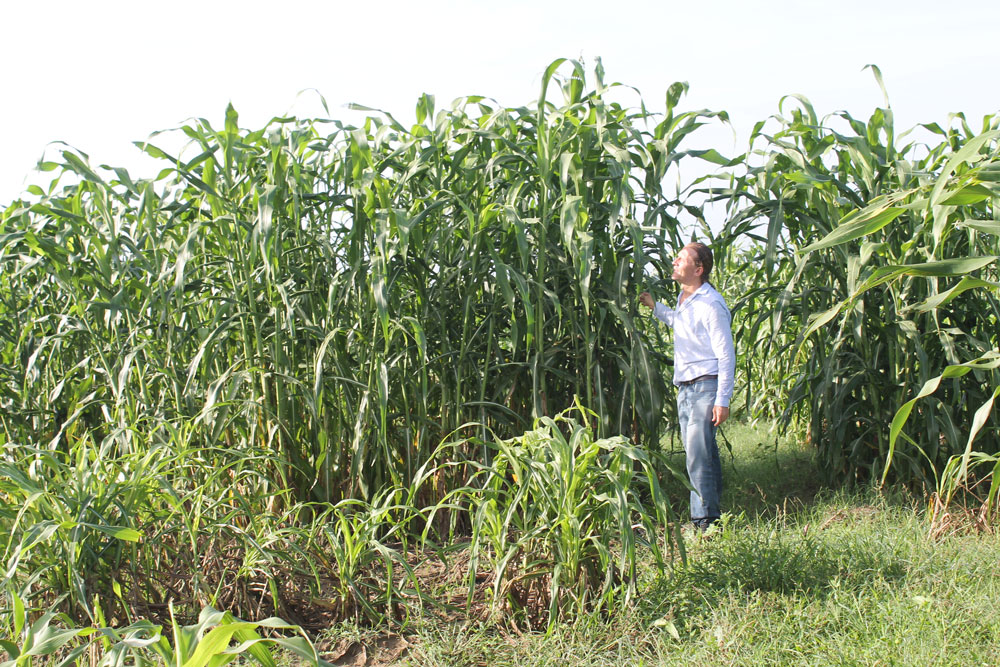 Securing the future of sorghum in Haiti

There’s no mistaking Gael Pressoir’s intense passion for two things: food security and equitable collaboration. That commitment from Pressoir, Dean for the Faculty of Agricultural and Environmental Sciences (FSAE) at Haiti’s Quisqueya University and senior scientist of the Chibas Foundation, is also evidenced by one of his favorite quotes by philosopher Emmanuel Kant:

“Theory without practice is useless. Practice without theory is blind.”

Throughout Haiti and Central America, sorghum is a critical food security crop. In 2014, nearly one-quarter of all grain production in Haiti was from sorghum. However, in 2015, a tiny insect threatened widespread hunger and food insecurity throughout the country: The sugarcane aphid crisis resulted in a loss of over 80,000 metric tons of sorghum, with steeper losses predicted in the years ahead. Using advanced technology, plant breeding techniques, and critical farmer insights, Pressoir responded by releasing an aphid-resistant sorghum variety in 2017, which currently accounts for an estimated 90% of Haiti’s sorghum acreage. Since 2017, he has released three new varieties in response to the needs voiced by Haitian farmers. (This work was made possible by the Feed the Future Innovation Lab for Genomics-Assisted Sorghum Breeding).

Pressoir’s strategic focus on participatory research with farmers, international collaborative research, and support from organizations across the globe helped turn his sorghum work into a huge success for Haiti’s farmers and people. Support from CIRAD and the French National Research Agency (ANR), Global Affairs Canada, Haitian Ministry of Agriculture, W.K. Kellogg foundation, and most recently, the Feed the Future Innovation Lab for Crop Improvement (ILCI), paved the way for scientific work directed by Haitian researchers. In 2019, recognizing the incredible work Pressoir’s team had accomplished by saving sorghum in Haiti, ILCI awarded the team a one-year grant, or “Quick Win,” to validate his prior work rescuing sorghum land races and measuring ‘genetic gain’ – the improvement of a phenotype due to selection over several cycles of breeding.

The work happening in Haiti is coming at a critical time. Despite one of the worst aphid seasons on record due to drought and other unforeseen setbacks, Pressoir says 2020’s results are very encouraging. The team’s studies indicate that the major gene involved in aphid resistance confers critical resistance to the plant; however, they are in the process of mapping other areas of the genome that contribute to an enhanced level of resistance as years with aphid eating frenzies (like 2020) cause strong selection pressure and result in yield penalties. Quisqueya University’s Quick Win progress and proposed plans for future work have launched them into yet another opportunity with ILCI – co-developing a Center of Innovation that will serve as a regional hub for crop improvement.

“We are thrilled to be part of the extended ILCI family and to lead the delivery of a twice ‘green’ revolution for Haiti,” Pressoir said.

CACCIA, whose acronym translates to “singing in unison” will integrate strengths of both organizations to increase genetic gain in sorghum, common bean, and sweet potato while building a strong connection between research, breeding, and product placement.

“CACCIA is the opportunity to put all our plant breeding science and technology pieces together, and we are extremely proud to have united such a wonderful interdisciplinary team of national and international scientists,” Camacho said.

By strengthening these often-siloed connections and advancing technologies, tools, and methodologies, CACCIA will benefit smallholder farmers throughout the Caribbean and Latin America as they work to improve traits such as drought tolerance, nutrient quality, shelf life, and pest resistance in crops that are essential for both regional food security and livestock forage.